International dairy prices continued to increase in 2017, driven by declines in milk production in the last quarter of 2016 and first quarter of 2017, and by a strong demand for fat solids. Butter prices showed a spectacular jump in the first half of 2017, but came down by the end of 2017, that on average butter prices were 65% higher than in 2016. During 2017, the prices of whole milk powder (WMP), cheese and skim milk powder (SMP) increased by 28%, 25% and 3%, respectively.

In the short term, butter prices are expected to decline further during 2018 but remain higher than in recent years. The price of cheese is expected to come down, as the supply of fat solids increases relative to its demand and the price of fat solids declines. The prices of milk powders are expected to increase in 2018, although the recovery of the SMP price is likely to be slow given the still relatively high stock levels, especially in the European Union.

World milk production experienced a modest growth rate of 0.5% during 2017, which is much lower than the average growth rate of 2.1% during the last decade. Major exporters such as the European Union, New Zealand, Australia and Argentina witnessed a decrease in production during the first half of 2017 followed by a partial rebound in the second half. In the same period EU milk production declined in some key dairy producing Member States such as France and Germany, due to adverse weather impacts, low milk prices and herd declines. In the United States, stagnant growth in milk cow numbers and in yield per cow curbed supply growth. Despite low feed prices, the US milk margin fell in 2017 following the decline in the farm gate milk price. In Argentina milk production in 2017 recovered slowly from the more than 10% fall in production in 2016. An expected rebound in New Zealand milk production for 2017 has been delayed due to wet and cold spring weather (August-September). In Australia the growth of milk production was hampered by a contraction in the number of dairy farms and herd, due to poor seasonal factors and a low farm gate milk price.

Trade in dairy products is benefiting from stronger GDP growth, though trade growth has slowed down during recent years. The People’s Republic of China (hereafter “China”), the largest importer of milk products, increased its 2017 imports of WMP and SMP combined by 6% relative to 2016, but this is still lower than the highs of 2013-2014. In contrast, China’s cheese imports increased by 16%, continuing a decade long growth pattern (China is the world’s fifth largest cheese importer). Oceania’s dairy exports were below their 2016 values, with the exception of New Zealand’s cheese exports, which increased for the second year in a row. New Zealand has reduced its production of WMP, but increased its production of cheese in response to growing world demand. Fluid milk exports have been rapidly expanding in recent years and, following a 16% increase in 2016, grew by a further 4% in 2017.

Trade measures affecting dairy trade are India's extended import ban (until 23 June 2018), the Russian import ban (extended till the end of 2018), an import ban by Mexico on all dairy imports from Colombia due to a Foot and Mouth disease outbreak, non-tariff measures (e.g. by Indonesia to US dairy products), and the free trade agreement between the European Union and Canada (CETA), in place since 21 September 2017. In addition, stocking and destocking strategies may have short-term market impacts. During the period 2015-2017, the European Union built up a public intervention stock of SMP of 378 000 tonnes (which is about 6.5% of world SMP production and about 20% of world SMP trade). SMP stocks also increased in the United Sates and India. 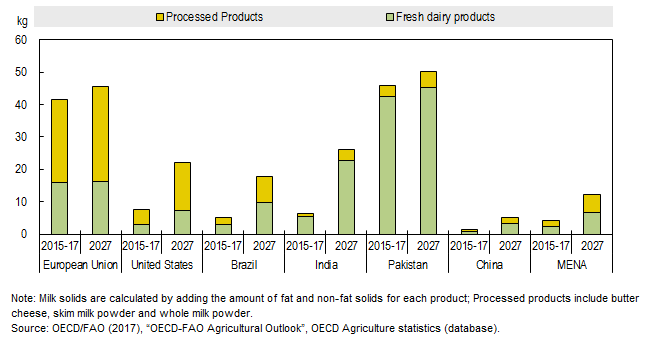 Dairy demand in developed countries has been shifting for several years towards butter and dairy fat and away from substitutes based on vegetable oil. This trend can be attributed to a more positive health assessment of dairy fat and a change in taste. As incomes and population increase, and diets become more globalised, more dairy products are expected to be consumed in developing countries. In developed countries, per capita consumption is projected to grow from 22.2 kg in 2015-17 to 23.1 kg in 2027 in milk solids, compared to an increase from 10.6 kg to 13.5 kg in developing countries. There are, however, significant regional disparities amongst developing countries, where predominantly fresh dairy products are consumed; this contrast with developed countries, where consumer preferences tend towards processed products (see figure above).

Whereas the butter price is expected to continue its decline after the butter bubble in the first quarter of 2017, after that the price of cheese will increase by about 2.1% p.a. over the projection period. The prices of milk powders are expected to show a stronger increase (SMP 3.4% p.a., WMP 3.4% p.a.), but in the case of the SMP price this percentage should be put in perspective as it starts from a low base in 2017 and is expected to recover only slowly in the short run due to stock levels that hang over the market. Despite the relatively strong growth in milk powder prices in nominal terms, they are not foreseen to return to the highs of 2013-2014 and hence will remain stable in real terms.

Currency depreciations (2027 relative to 2015-17, with respect to the United States dollar) in Argentina (104%), Brazil (14%), and Mexico (13%) will encourage growth in exports from these countries as they become more competitive relative to the United States, but also compared to the European Union and Oceania. On the import side, the currencies of most large importers – in particular China, Philippines and Indonesia – are expected to be stable or even slightly appreciate and are not likely to negatively affect their dairy product import demands. An exception is Egypt, whose currency is projected to depreciate strongly. In Japan, import demand is constrained by an ageing population, while in Canada it is limited by domestic dairy policies. Between the base period and 2027, the European Union's share in global exports of dairy commodities is expected to increase from 24% to 28%. India –the world’s largest milk producing country – has a large expanding domestic market, but is not projected to become an important player on the international market.

» The full chapter is available here.